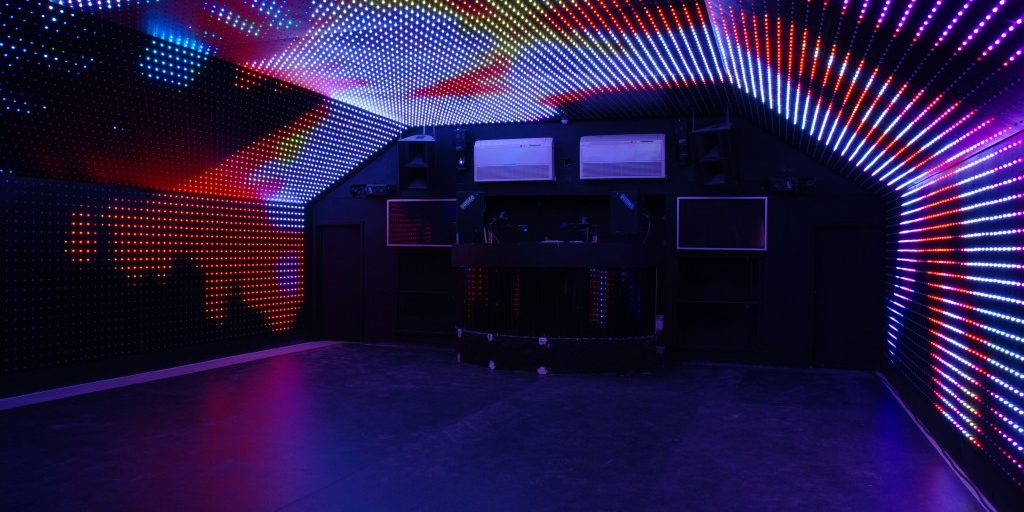 The flexibility of the iColor Flex SL (now iColor Flex MX gen2) strands allowed the technology to be fitted virtually anywhere in the room; contouring around archways and twisting around corners. The nodes had to be spaced in increments small enough to produce decent resolution and the designers determined that 48 prefabricated panels were required; each lined with iColor Flex SL (now iColor Flex MX gen2) strings that were then sandwiched between two plywood sheets. To achieve the desired pixel resolution, the LED nodes were spaced 4in apart, and over 50,000 holes were drilled to accommodate a total of 12,672 LED nodes, and corresponding wiring.

When complete, the panels were lifted into place and each string was connected back to the drivers based in the control room, using an 18-way multi-core cable. Philips Color Kinetics’ Video System Manager converts video signals from a media server and streams the content to the LED nodes – essentially reproducing the video-based imagery against the grid of lights.

Philips Color Kinetics fixtures were also installed in the ‘Light Corridor’ where a similar but smaller version of the ‘Light Box’ lighting display is featured. Here, nine iColor Flex SLX strands with translucent domes create a pulsing effect down the length of the passageway.