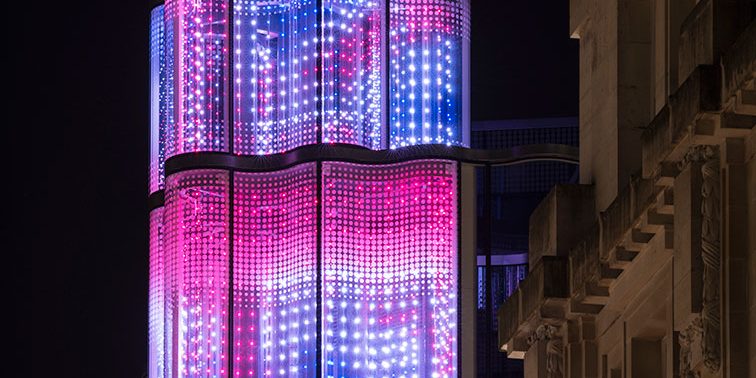 61 Oxford Street is a striking new building in London’s prime shopping area, and is sited on the corner of Oxford Street and Soho Street.

The building’s signature is the use of rippling glass facades, and references the oriel or bay style shop front windows that were popular with London’s retailers in the late 19th century.

The previous building on site featured a corner tower of architectural interest, and is the inspiration for the glazed lantern feature that rises from level five to the peak of level seven on the new building.

StudioFractal were commissioned to design a bespoke light art installation for the lantern, and specified the iColor Flex MX gen 2 solution from Philips Color Kinetics.

iColor Flex MX gen2 is a multi-purpose, high-intensity strand of full-colour LED nodes for generating extraordinary effects, and enables patterns and video on almost any interior or exterior surface.

Forty-five custom length strands ranging from 26 nodes to 71 nodes have been installed within the lantern, and are fixed to a specially designed frame that follows the undulating glass.

A Pharos LPC 20 is used to manage the content for the strands, and working from StudioFractal’s design drawings, Architainment mapped 2759 RGB nodes (8277 channels) of control. This was a particularly complex process, since the node design wraps around the lantern structure and is in effect three-dimensional.

A series of scenes based on the seasons and nature have been created to run automatically throughout the year, and specific scenes have also been created to mark days such as Valentine’s.

In addition to providing an auxiliary button station in reception for manual control, Architainment also supplied an IP rated and cooled equipment rack. This houses three Philips Color Kinetics sPDS-480ca units that provide the power and data for the nodes, a 16 port Ethernet switch, and the LPC20.

Architainment programmed all the timelines and triggers on the Pharos LPC20, and partnered with Studio Fractal to commission the final solution into operation.

Westminster Council, British Airways Trustees and AHMM are delighted with the light installation, which helped the project gain an RIBA National Award.