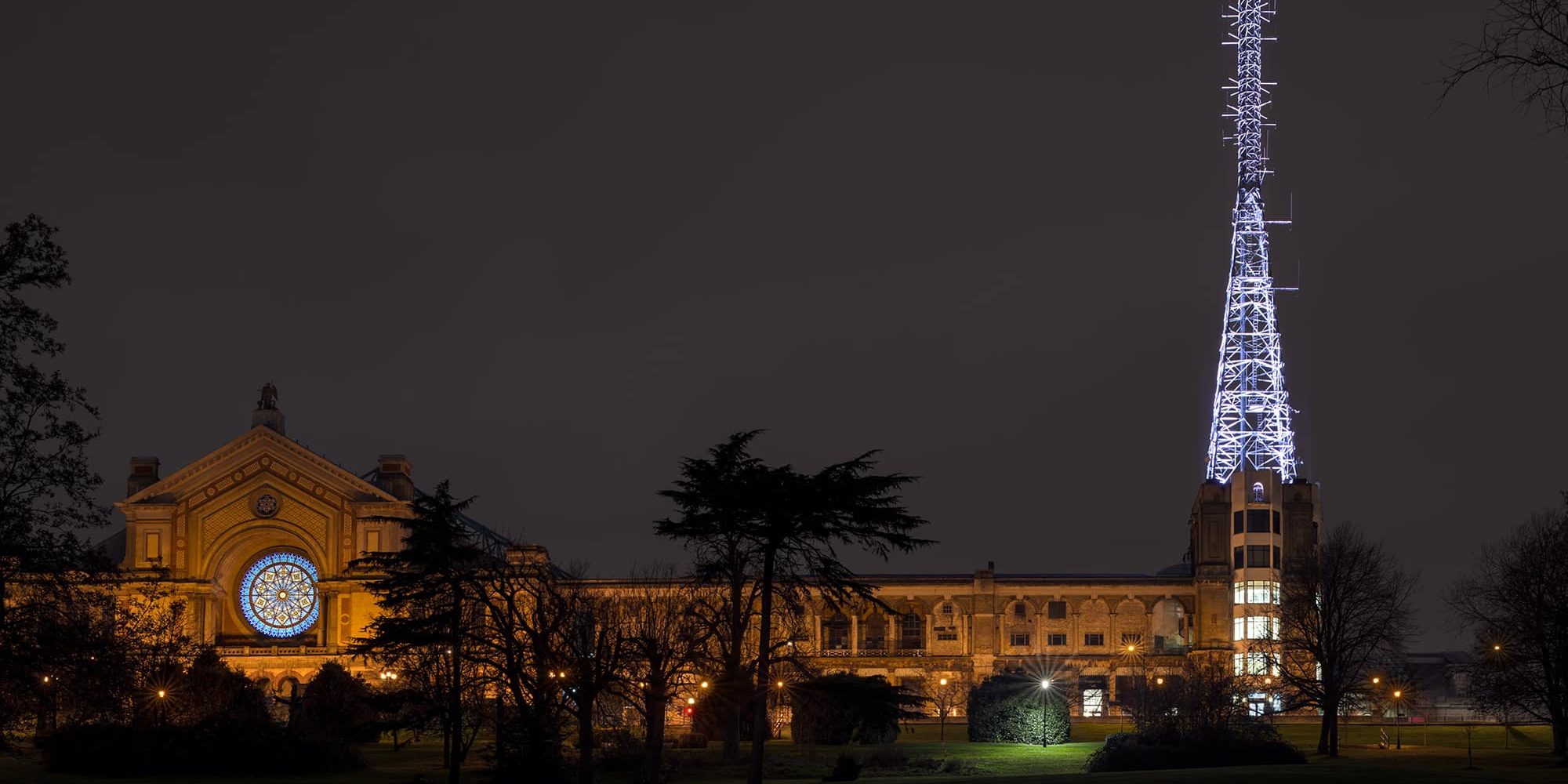 Dating back to 1873, Alexandra Palace is an iconic London venue with a rich history. Having survived two fires, hosted the first regular high definition television service and having played host to thousands of extraordinary events, Ally Pally, as it is lovingly known, has a 140-year strong heritage.

Alexandra Palace is currently undergoing a major restoration project. The lighting up of the mast and tower, visible from around North and East London, is a signifier of the progress being made to bring derelict areas of the building back to life. Previously an unlit structure, the brief for the project was to sympathetically showcase the scale of the structure whilst allowing the Palace the flexibility to change the lighting according to special dates and events offering versatility and interest. The transmitter mast was to be lit in full ‘Technicolour’ to celebrate Ally Pally’s part in the history of BBC television.

Ridge and Partners LLP were commissioned by Alexandra Park & Palace Charitable Trust to create a suitable lighting solution, part of a much wider refurbishment project, and opted to use Architainment Lighting for project support. Offering a plethora of high profile lighting brands, Architainment provided latest generation Color Kinetics LED fixtures, which were selected to light up the mast – with each luminaire fully DMX controlled, allowing each fixture to operate independently or as part of a group.

The building being Grade II listed meant there were constraints to overcome in terms of the lighting design, and a non-intrusive solution was paramount. Color Kinetics Color Reach RBGW fittings were positioned at the base of the structure, without the need for mounting any luminaires on the mast. The base of the structure is lit internally allowing the light to reflect through the tower’s latticework offering visual depth and scalability. The upper part of the mast is lit externally, allowing the top and bottom to be controlled separately whilst offering complete uniformity from base to tip.

The mast was first lit as a trial for one night on 2 November 2016, to coincide with the BBC Television 80th anniversary (2nd November 1936), the anniversary celebrations at Alexandra Palace and TX of the BBC4 documentary “Television’s opening night: How the box was born”.  Since that date and the installation of a permanent lighting solution in October 2017, lighting the AP mast has become an integral part of the fireworks festival and other Alexandra Palace events.

The entire lighting scheme was fully designed, installed and commissioned at only a third of the original budget thanks to the new generation of Color Kinetics products, making an auspicious start to extensive lighting scheme plans at Alexandra Palace. Andrew Selwood, Associate, Ridge and Partners LLP says ‘Working on the mast has been a privilege and working with the Palace to understand its historic and cultural value has been an education. In undertaking the work and trials we have been approached by various members of the public who are delighted to see the mast lit at last and to be a focal point on the north London skyline.’

James Atkinson, Director of Fundraising made the comment ‘Pound for pound this is one of the best investments we have ever made for the Palace’.