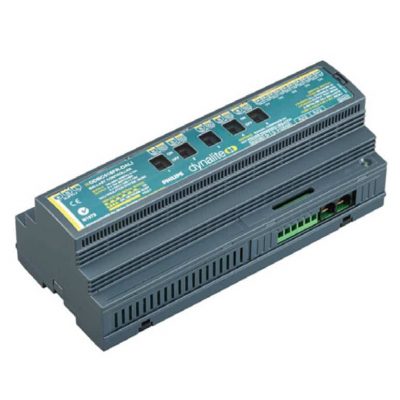 The Philips Dynalite DDBC516FR is a five channel device for controlling DALI drivers Each control output is selectable to DALI broadcast, DALI addressed, 1-10V or DSI
Multiple protocols supported – Each of the five control outputs supports DALI broadcast (maximum ten DALI loads/channel), DALI addressed (maximum ten DALI loads/channel), 1-10V (maximum 10 mA sink or source/channel) or DSI (maximum five DSI loads/channel)
Built-in energy savings – Control signals can be programmed to operate in tandem with five internal switched outputs, which will automatically isolate the power circuit when all associated channels are at 0% This is a useful feature as DALI drivers still draw significant power when lamps are turned off via a DALI command
Integral DALI bus power supply – Removes the need for an additional external device
Flexible mounting solution – A DIN-rail mountable device, designed to be installed into the distribution board supplying power to the controlled circuit
Inbuilt diagnostic functionality – Features lamp and driver failure reporting, driver run time tracking for each driver and the switched output, as well as Device Online/Offline status indication